An example of ignorance

Factor investing is a form of quantitative investing that is based on the exploitation of academically researched factor premiums. The generally accepted concept is that some stock-specific attributes explain the return and risk of a group. The seminal work of Fama-French created vast research on the topic of factor investing and gave birth to research, discussions, styles, and the term smart beta.

Reverting to the introduced framework, using smart beta as an investment process can be easily translated by a function using some informative elements to predict alpha.

From a fundamental perspective, we can propose that it is taking a shortcut from analyzing every company in depth and taking a more informed investment decision. The case for smart beta is based upon sound financial theory and rooted mainly in historical performance, as value has outperformed growth and small capitalizations have outperformed large capitalizations on average over the last few decades.

Rule-based smart beta investing takes a rule of thumb approach to alpha prediction. From our perspective, a more robust approach can be shown when we apply our previously introduced framework.

Let’s look at the value and growth factors. Value has been documented to outperform growth in the US markets over the past century. From the perspective of averages, 100 years of data is a sufficient sample size to confirm or reject this claim.

Considering that observation, we are not saying that there is no value to be extracted by having a passive exposure to those factors. But we argue that this approach, as the one popularized by the well-known index providers or some major asset manager, is subpar from a systematic perspective because of two reasons:

Our criticism stems mainly from the point of view that those simple rules are a shortcut to the alpha prediction problem we talked about during the first part of this series.

Writing the rule for a value smart-beta strategy would go along the lines of:

The result of this rule is:

The rule works over a century but is more random in a shorter time horizon such as a few years; the length in which advisor is evaluated. In our opinion, this makes it difficult to approve these choices for clients.

Over shorter time horizon, those academically researched factor premiums can be easily distorted. A question to answer is:

The answer is yes. A company’s bad outlook can lead it to be perceived very cheaply by the market, but essentially could be worthless in a few months’ time if it cannot repay debts. At this point, we could introduce another rule (second axis of decision): the company needs to be cheap and have a sufficient liquidity to pay its debt for the next 2 years. We can do that iteratively by creating more and more rules to extract the relationship between the different decisions axis, but this greedy method becomes complex rapidly.

Many are going this route of more and more complex rules to overcome the caveat of simple rules. However, those methods are prone to many biases as it’s easy to find a rule that worked in the past, but with little predictive power out of sample.

By using machine learning methods, we overcome these biases and we can take into consideration the complex relationship between the different factors and informative elements that are left out by factor investing and the linear framework they use.

As a sneak peek of what is to come when we will introduce our investment process in more details, the following figure illustrates a key finding of our prediction process when we look at the contribution of value factor positioning for our securities at a specific moment. It’s important to note that we look at a lot more than just the value factor.

Considering our prediction horizon, we can observe that the value factor displays a non-linear relationship that is difficult to generalize with a simple rule. Analysing this figure, we seem to be able to extract the following: 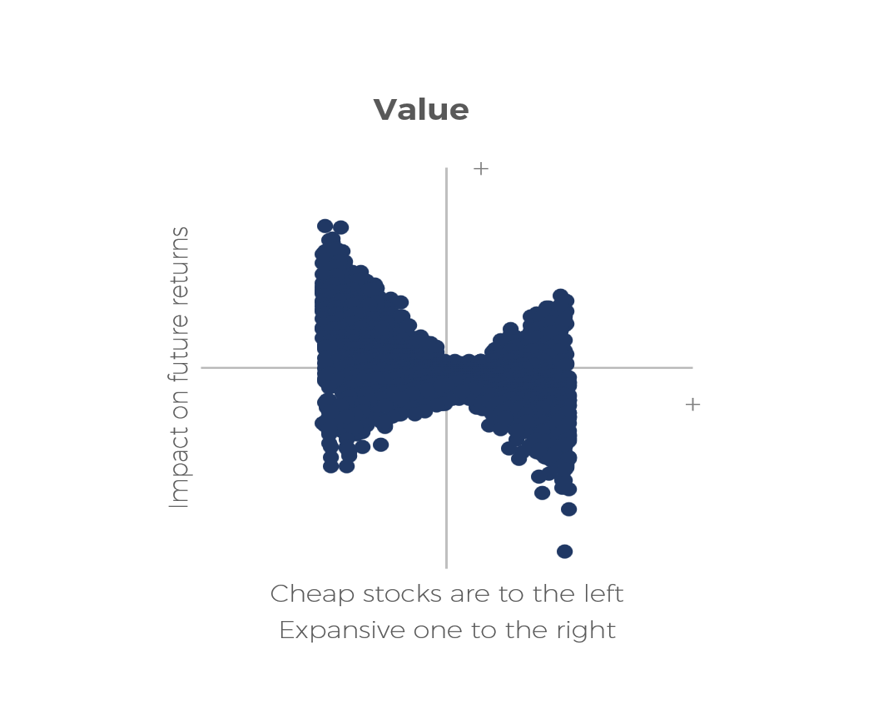 Puzzling isn’t it! However, we firmly believe this is a better representation than the rule-based approach as it takes into considerations more information and the inherent complexity coming with it. We are still being ignorant on some aspects, but to a lesser extent.

The next part of the series will be about the quest for alpha at Evovest. We will concentrate on the specifics without giving away too much.